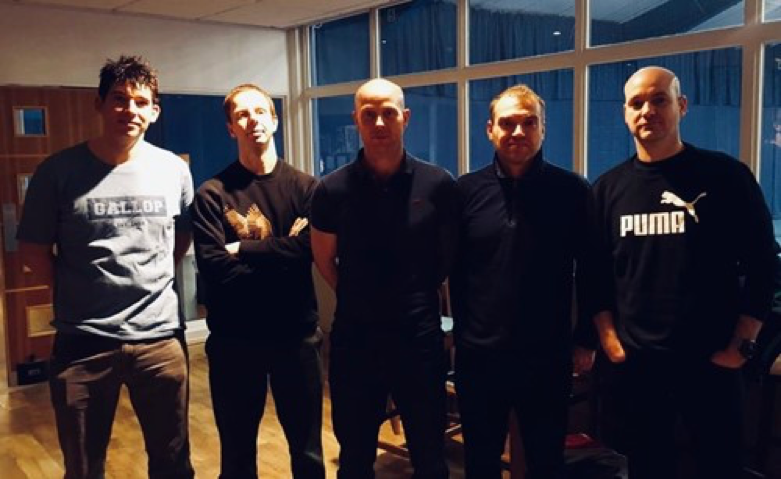 The Suffolk O35 team of Nick Ramsey, James Bird, Stuart Lipscombe, Ash Burton and Tom Ison travelled to Purley, in Surrey, for the first round of intercounty squash of the season on Saturday 2nd March. We knew we had two tough games against two good counties in Hampshire and Buckinghamshire.

First up was Hampshire and Tom and Stuart were up first. Tom played in what was what the strangest start to a match I have seen in a while. He lost the first game 11-1 and then managed to win the second 11-2! Three tight games ensued which resulted in a narrow 3-2 loss. Stuart was on the other court. He lost in three tight games, with the crucial points at the end of each game going against him.

Ash and Nick were up next. Ash played a blinder of a first game, winning comfortably with a combination of great retrievals and shots. This seemed to take its toll on him and he could not maintain this level which allowed his opponent to take the next three games which resulted in a 3-1 loss. Meanwhile, on the other court, Nick was having a great ding dong with an old junior rival. The first 4 games were shared. Then, at 9-8 up in the fifth, Nick received a let on what everyone else, including the two players, thought was a stroke. Unfortunately, his opponent then won the next 3 points which resulted in a narrow 3-2 loss.

Second up was Buckinghamshire. Tom and Stuart were again on first. Tom was playing against an opponent who had not played in the morning. Taking advantage of having fresh legs, Tom’s opponent managed to win the first two fairly well and Tom was unlucky to lose the third 13-11 which resulted in a 3-0 loss. Stuart meanwhile shared the first two games with his opponent. His opponent managed to get the best of the last two though which resulted in a 3-1 loss.

James, on last again, won two tight games to gain a 2-0 lead. His energy levels took a dip in the third and fourth, but he managed to play well in the fifth to gain his second win of the day, this time 3-2.